One description of the Bellingham GLBTQ scene. Opinion of course. 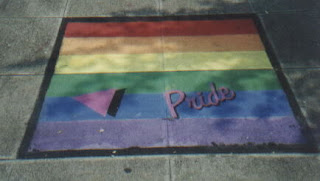 This Guide may come to the top of search engine listings when "gay bellingham" is queried. That is partially because there has not been (as of yet) any umbrella organization serving Bellingham's diversified glbt community.

Occassionally people have gathered together with the goal of establishing a city wide organization. Sometimes a new web site gets launched, but volunteer energy invariably runs out. People scatter off in various directions and the site doesn't get updated.

Meanwhile, I keep maintaining this guide and my glbt newsletter and my Facebook Group even though I am not an organization. I am an individual who loves doing things on the web. Also it brings interest to other sites I maintain.

Possibly this site's biggest manifestation is a Wednesday Dinner social. Every Wednesday we have a gay dinner that's real friendly and often brings 10 - 25 people together. Almost always men, but open to all.

Unlike a large city with obvious institutions, bars and gay ghettos Bellingham is fairly quiet. At the same time it doesn't seem to be anti gay. Over time, social networks form. Both Whatcom and Skagit Counties have PFLAG organizations.

Bellingham also has The Betty Pages, a local alternative lifestyle tabloid (on paper, remember that stuff). Distributed at some restaurants, bars and other places in Whatcom, Skagit and Snohomish Counties. Also distributed in cannabis shops across Washington State.

Rumors Cabaret, sometimes said to be "our bar," has a very mixed crowd. A popular dance bar and major support for Bellingham's Pride Festival. Next Door is the Back Door, a quieter, more conversational space.

Travel to the two large cities of Seattle, WA. or Vancouver, BC. is considered one of Bellingham's assetts. They are fairly handy.

Gay people tend to participate in the main stream of local life going to places like the Y and other types of community groups. There are also several open and affirming churches in the area.

Politically, Bellingham tends to be "blue state," but much of rural Whatcom County might be classified as more "red state."

Every year there is a Pride Festival. Several thousand participate. It's usually the weekend of the second Sunday in July.

Looking for a "soul mate" can be frustrating in places other than large cities. While there may be lots of folks around, everyone is a bit different. People are either "too old," "too young" or what ever. Some would say it's like being washed up onto a desert island. There might be "one drag queen," "one leather man" and "one lesbian" at some gathering.

Various subgroups within the gay scene can be so small that subgroups basically have to get along.

Patience is an important virtue. Also learning to value a wide circle of friends from different stripes.

People often fall in love with someone from a distant city; thus leading to the term "I-5 Relationship." I-5 the freeway that Bellingham is on.

Still, a lot of glbt folks like living in the Bellingham area.

WynnBET is understood for its well-liked Las Vegas Wynn Resorts properties. The operator lives as much as} its name 카지노 with the range of available video games. Winning is great, and getting paid out in time and in a safe means is even higher.